Where do the weeks go?

Wow, so my last post was in November!! I just never find the time to blog these days, and it has taken me being struck down with a cold and off work for two days to find the time to write this one!! 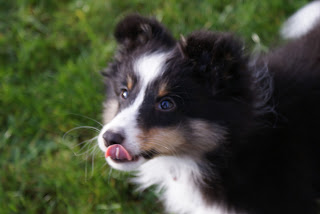 Fuze is now a whole 17 weeks old! Where does the time go? He has started becoming a young man now, as opposed to a puppy, and is developing a really cheeky and adorable personality. He is very brave and confident, with loads of attitude, but is quite sensible with it, which I am pleased about. He is definetely a comedian, and is permanantely making me laugh. His latest thing is to flip one of the lounge beds upside down, then to run around with it on his back as though he is a turtle! Very very funny, and I keep trying to get it on film, but I never seem to have my camera on me, and if I get up to fetch it then he stops and decides to follow me! 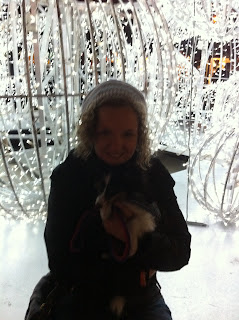 I have discovered that christmas is a really good time to socialise a puppy. Lots of parties and crowded streets of christmas shoppers to take him to. He has been to lots of different peoples houses, to the christmas markets, in lots of shops christmas shopping and loads more! Generally he has been really well behaved, although walking him through town was interesting as he felt the need to lunge and bark at peoples feet, trouser legs and shopping bags!! So we worked on keeping him calm and taking small steps with his focus on me, rather than lunging and barking, and we were making progress. I wanted to try and do this more, but the weather has not been on our side recently, with freezing hail and torrential rain on almost every single day so far in December!! He also finds children particularly strange as they squeek and move very suddenly around him, so we have done lots of trips to the garden centre (as there are children everywhere up there at christmas) and asked pretty much every child we met to give him a treat. 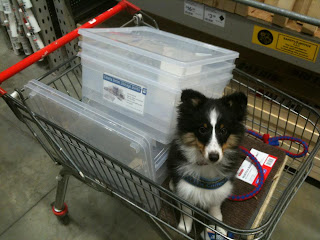 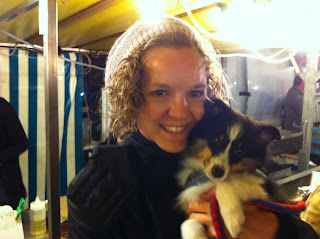 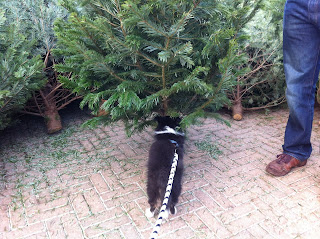 The one thing I have noticed which is very different to Smudge is that Fuze is not really a massive 'people' dog. He will accept being stroked and petted, but you can see that is certainly isn't the highlight of his day!! This is an very unlike Smudge, who is everyones best friend and just adores fuss and attention. Fuze is completely different. He likes Oliver and I stroking him, and holding him, and is quite happy with us, but he isn't so keen on others. He particularly doesn't like gushy "oooooo look at the puppy" type people, which there are a surprisingly high number of!! Some people have said to me that I really need to try to change that and get him to enjoy it. One woman in the pet shop gave me a lecture on it!! lol But I ask myself why? I think they misunderstand what socialisation is for, I don't believe it is to try to change a puppies character! He just isn't that kind of dog. I agree all dogs need to be able to accept stroking and fussing, and I certainly don't want him to be people shy, but if he is stand offish in nature I am not going to try to make him something he isn't!! I would fail anyway! I am always careful not to let people overdo it with him, so it works both ways. He lets people fuss him, he may even get a biscuit for it, and in return I make sure people stop when he has had enough. This is working really well, and I think Fuze is becoming a very well rounded young man! He is absolutely perfect in my eyes and I could not have asked for a more amazing puppy.

We are still working really hard on tugging. In the house and garden we have a tug maniac, but when we are out and about he can be less keen! It takes some effort to get him interested as everything else is far more distracting. So we now take our tug on all of our walks and I try to do 5 minutes at the start, and 5 minutes at the end with him, just to get tugging in different locations. Each new place we go takes a bit of work, but we are getting there. This is something I really want to put the work into now, as I had such problems with Smudge. I did eventually get Smudge tugging, but it took a lot of work (and a lot of help from our friends!) to overcome the problem, with a lot of toys stuffed with sausages along the way!! lol Fuze is a natural toy player, so my job is far easier this time, we just need to work on the distractions and we will have it cracked. 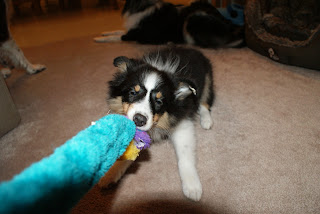 He is loving joining in on our walks properly now, although we don't allow Mayzee and him off the lead at the same time. Mayzee is our 'sheltie exerciser' as she likes to run and run and run on a walk. Smudge likes to chase her, which is great for him, but not so good for a very young puppy!! Fuze is dying to chase Mayzee, but obviously can't be allowed to as he is far to young. She goes too far and the risk of injury is just too great. So for now we alternate between the two of them who is off lead at any one time (much to Mayzee's disgust!) As well as the injury aspect I don't really want him learning to chase mindlessly and would rather train him to recall off a chase before he is allowed to run with her. So it will be a few months yet!

For our other dogs agility training has pretty much completely stopped for the time being. Mainly due to the weather!! Our field is completely waterlogged at the moment, due to the sheer amount of rain we have had! Such a shame as I have had to cancel all lessons and a christmas training morning. We are hoping for dry weather over the holidays to give everything a chance to dry out. To be honest though they are all quite happy with their daily walks, a bit of trick training and lounging around the house. It is their down time!! :-)

Smudge and Mayzee have both received invitations to run at the Channel Island Dog of the Year event, which is to be held in February, so I would like a good few weeks training before that. As well as that, the team has now been selected for the World Agility Open in May 2012, and I am pleased to say that Smudge will be running in the 400 height, and Mayzee will be running in the 525 height. Two Eden dogs on the team! I am really excited about this event, and cannot wait for May to arrive. Lots of training and preparation to be done before then!! 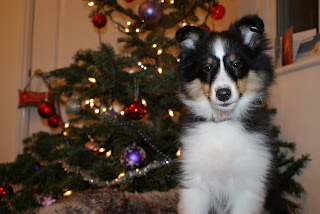 So that is about all. We have lots planned over christmas, so I hope this cold goes. We are off to my mums for the big day, with eleven people and six dogs! No doubt Fuze will enjoy his first christmas, and all the dogs have their presents under the tree already. Have a wonderful time and happy christmas to you all! 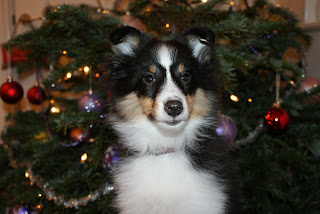 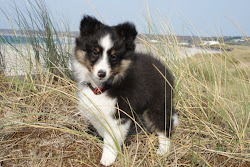 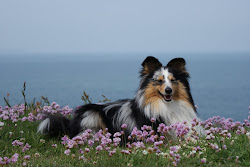 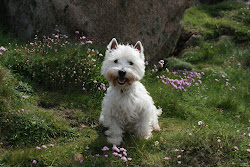 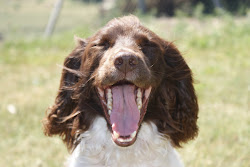